Plumbing » Why Is My Toilet Water Brown? 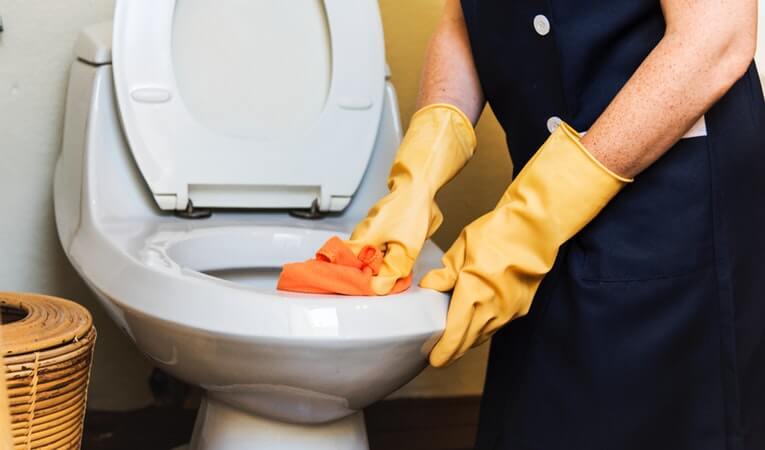 Do you flush the toilet and the water that refills the bowl comes out a nasty brownish or orangish color? Although discolored water can be concerning, there’s no need for alarm. Your water is probably not toxic or unsafe and it’s likely that you’re having a common pipe issue. Luckily, this can be easily resolved with the help of a plumber.

This article will explain the reasons why your toilet water may be brown and what you can do about it.

The first thing you should try is wait for the bowl to refill and the flush cycle to end, then flush again to make sure it’s not just residual waste that one flush didn’t quite eliminate. If the water is still brown, the good news is that it’s probably not poop causing the discoloration.

If after flushing a couple times the water still looks brown, you should check the other sources of water in your house. Plug the bathroom and kitchen sinks, your tub, or anywhere else where water flows and run both the hot and cold taps to check the color of the water coming from those sources. The next steps will tell you what to do if all your water is brown, or just your toilet water.

What It Means If All Your Water Is Brown

If it’s not just your toilet but your taps are producing brown water as well, it could be that there’s too much iron in your water. You may have already noticed other signs of too much iron in your water, such as clothing coming out of your washing machine with new, rust-colored or dark stains, a swamp-like smell in your house (especially around sources of water), or the water from your faucet tasting like metal.

If you have too much iron in your water coming from all taps, it’s likely caused by corroded iron pipes. This is more likely in homes where the plumbing was installed before 1960, before more modern pipes made out of materials like PVC became the norm. Too much contact with oxygen and water can cause iron to rust and the iron or iron bacteria to seep into the water.

What It Means If Only Your Toilet Water Is Brown

If only your toilet water is brown, it’s still probably due to corroded iron pipes. Your toilet just may have its own water pipe, so your taps and other sources of water aren’t affected. While in most homes, all the water comes from the same source, the pipes still lead to different taps in the house and the pipes can be made from different materials. The rest of your water may be unaffected because only the pipe to the toilet is made of iron or is the only one with corrosion.

What Should You Do About It?

Your best option is to call a plumber to check and replace your pipes. You may only need to replace the one to the toilet, but it’s worth having your other pipes checked too. Replacing all the pipes in your entire home may be costly, but you may need to do it to prevent leaks and water damage.

If you don’t need to replace all your pipes, there are still solutions for solving the problem of iron in your water. You can purchase an iron levels testing kit to check the levels yourself or hire a plumber to do it. With a plumber’s test, you’ll likely get a higher-quality test with more accurate results read by someone with lots of experience testing iron levels in your water. If you do it yourself with a kit you may save a few bucks, but the test could be faulty or you may not understand how to read the results.

Whichever method you use, if high concentrations of iron are found in your water you may want to use a water softener or a chemical treatment to cut down the amount of iron and iron bacteria in your water. These softeners and treatments vary in price and unless you’re very handy and experienced, you’ll probably need a professional to install them.

If you have a serious case of excessive iron levels you may require an aeration system. An aeration system changes the iron into a different form that can be easily filtered and removed from your water. Chlorine can also be used to eliminate iron bacteria but won’t remove the iron itself.

Is It Dangerous to Have Iron in Your Water?

If you discover that you’ve been drinking iron water from your taps, don’t panic. The discoloration you’re seeing is just rust, exactly like the stuff you see on a bicycle that has been left outside in the rain for too long. It sounds gross and unappetizing, but it’s not necessarily toxic or harmful. However, it can cause other serious problems, like weak or reduced water flow from mineral deposit buildup or leaky pipes from metal that has been destroyed from too much rust.

If your home was built before the 1960s and you’re noticing brown water in your toilet or other sources of water, it’s probably due to iron rust from one or more of your pipes. This water isn’t necessarily toxic or dangerous for your health, but it can damage your home and is generally undesirable.

You should call a plumber and see if one or more of your pipes need replacing or discuss other options like treating the water to reduce iron levels. You can also test the levels yourself with a kit at home, but professional help is the best way to ensure that you won’t have more serious problems from leaks or water damage down the road.